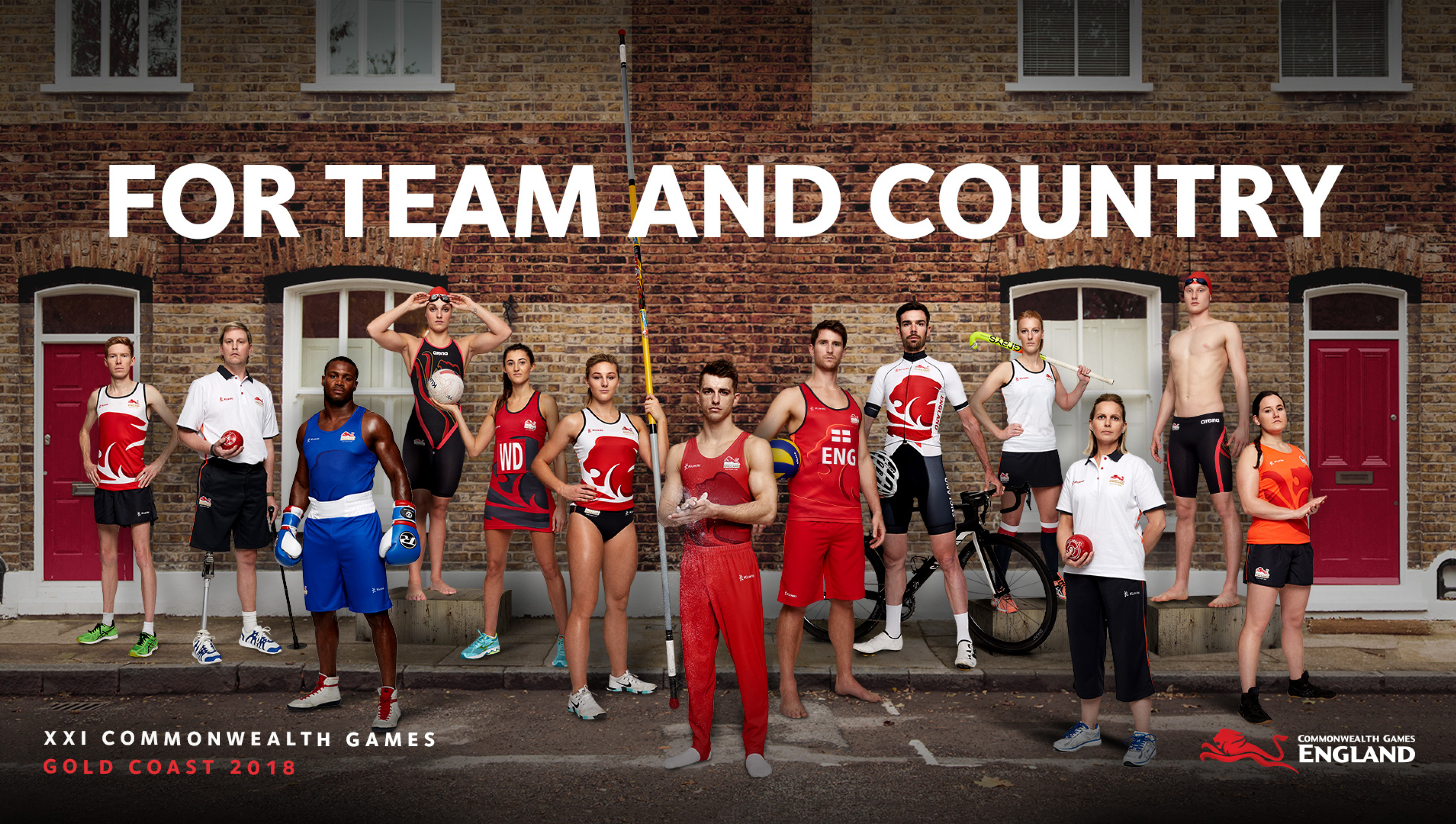 Kukri will be kitting out England’s largest team to ever represent the nation in an overseas sporting event with over 400 athletes and around 200 officials attending the Games.

Team England’s kit design has been given a modern and fresh re-brand since the last Commonwealth Games in Glasgow 2014 with new tones of charcoal grey and neon red added to the traditional red and white of England.

The unique designs were created with the athletes in mind and at the very centre of the process. A number of kit panels were held with representatives and athletes from the 18 different sports that Team England will compete in, sharing their opinions on what they felt would heighten their performance and experience at the Games.

Paul Brown, Team England ambassador and para lawn bowls player, was part of the athlete panel. He said:
“I was sent the colours and designs through and was looking at them picking out the good bits and there were a lot of them. It was a really good process from the start. It’s hard to judge it on paper but when you actually see it in real life it really does look absolutely fantastic as a finished article. It’s a lovely kit, I like the colours and it’s really comfortable to wear. If you look good and you feel good when you’re going to be in a good state of mind to head into the Games.”

Over 36,000 items of kit will be produced by the international sportswear brand across 10 manufacturers. An extensive product creation process has resulted in 259 bespoke product designs, incorporating the unique needs of 18 sports.

Max Whitlock, Triple Commonwealth Games gold medallist and Olympic champion in gymnastics, said:
“Putting on a kit to represent your country is a huge honour. What I love most about the kit is that you’ve got the big lion representing England in the best way possible. When you put on a kit that is so strong and really patriotic and you know that you’re going to go out there feeling like one team, it’s very important. Everyone is going to feel united and part of the team and we will all go out and perform together.”

After extensive planning over a two year period, Kukri has ensured that over 400 elite athletes will be wearing their bespoke sportswear with pride across delegation, competition, and ceremonial wear. Team England’s partnership with Kukri clearly underlines their desire to be known as the number one multisport brand.

Sarah Winckless, Chef de Mission at Commonwealth Games England, said:
“The kit creates an identity for the team to draw on – something magical happens when you have over 600 individuals dressed in the same theme, though appropriate for their roles, it joins us and makes us stronger. This is a hugely important and complex project, and I’m very proud to see the hard work that the team has put in coming together in this launch. The athletes are always at the heart of what we do at Commonwealth Games England so it has been great to have them as part of the design process through the kit panels. It has been fantastic to be able to take on their feedback so we can produce a kit that aligns with what they need in order to perform at their best.”

Andrew Ronnie, Group Executive Chairman of Kukri Sports said:
“Being able to supply bespoke sportswear across multiple sports is an unmissable opportunity for Kukri. Our experience over the last few years in supplying Team England with a performance kit and meeting the demands of national athletes has ensured we have a great relationship with them. It’s great to have a shared passion for improving the athlete experience. We pride ourselves on ensuring the Team England athletes look and feel their very best. We feel this will enable them to concentrate on performing to the best of their ability and we can’t wait to see them achieving more gold medals on the podium at the Gold Coast in 2018.”

Specialist swimwear brand Arena Water Instinct designed and produced the aquatics wear for the swimming and diving teams. Representatives from Arena flew over from Italy to be part of the kit panels and to ensure the design was consistent across the whole team.

Arena’s Team England product range blends high-quality materials with state-of-the-art technology to maximize performance in both competition and training. Its cutting-edge design blends tradition and innovation in a new vision, with a creative fusion of bold colours and touch of gold that catches the eye against the charcoal base.

Ellie Faulkner, Team England swimmer and Glasgow 2014 bronze medallist, said:
“I was lucky enough to see the last Team England kit at the Glasgow Commonwealth Games and this is a completely different take on it. It’s so nice and I’m really looking forward to wearing it. We will wear it proud and will be happy to be there and looking to do our best. Wearing the kit is an honour. It’s the athletes who are wearing the kit so it’s really important that we’re happy with it. When we’re feeling good we’re going to swim fast and feel the best we can be to do the best we can do.”

To celebrate the Games both partners have launched a new range of merchandise for you. To purchase your Team England merchandise, click here. This exclusive range is only available while stocks last.

Team England will compete in 18 sports, including 38 para medal events in the Gold Coast 2018 Commonwealth Games. The Team will be England’s largest team to ever represent the nation in an overseas sporting event with over 400 athletes and around 200 officials attending the Games.

Based in Lancashire, Kukri Sports prides itself on being an industry leading bespoke sportswear brand, providing team wear across a wide range of sports. Working with national teams, schools, colleges, and universities worldwide they supply high-quality bespoke team wear and leisure wear.

Kukri Sports take great pride in delivering an unrivalled service to customers and the main focus is on the needs, individuality, and style of its customers and partners. Kukri empowers peak performance through industry-leading sportswear reflecting the passion of sport in everything they do.